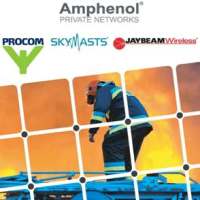 Our team recently attended an Amphenol Group training event and learnt about many forthcoming products as well as many customer applications for our range. Our product range may not be the most glamorous looking but play an important part in any radio system. Without them, they would not be as efficient or even operate properly. One example of this is the contract won by the Amphenol Group for the French Administration / GRDF.
This involved the supply of: • 15,000 GPS Antennas
• 90,000 cables
• 400 Yagi antennas
• 200 Mobile antennas
• 45,000 Omni directional whip antennas
• 15,000 mounts
• 45,000 Omni-directional antennas It all started in April 2013 where several prototypes were developed to meet GRDF requirements. One of the most important criteria was lightening tests. Subsequently, equipment was delivered in stages with other antenna, protector and cable prototypes developed until the order was fulfilled. Another successful contract for Amphenol was for 1200 panel antennas for the Italian Tetra Network which provides national coverage for the Italian police and national rescue organisations.
The network has been under deployment for more than 10 years with under 50% of country covered (80MHz is analogue system still in use.) Leonardo is the main contractor and 5 regions are to be covered in 2017-18. So far, approximately 1,200 antennas have been supplied: • 766.65.15.00
• 766.65.12.00
• 766.90.13.00
• 766.90.10.00 Another story to share was for a DAS (Distributed Antenna System) at af Fire station
Communication is critical in a fire station and the APN delivered a turnkey solution with DAS components including • Pick up antennas
• Repeaters
• Combiner
• Cables and connectors
• Splitters
• Tappers
• Indoor antennas
• High power Tetra repeater • GSM900/GSM1800/3G/4G repeaters The project provided several challenges, most notably a system design that could achieve full building coverage on all systems including TETRA / 2G / 3G / 4G. The project was a success producing a multiband system in one antenna system. A spokesman for the Amphenol Product Networks said, ‘we learnt many lessons in the development of this project. Firstly, design can be more complicated than expected…there is a distinct difference between theory and practice. We also leant that it is important for integrators to have a stock of products in case there is a need for a quick redesign.’ To find out more about any of these products featured and the benefits they can provide to a communication system, give our team a call on 01227 743099 or sales@procomuk.co.uk 30/08/2017